Established in the year 1969, Banaskantha District Cooperative Milk Producers' Union Limited commonly known as Banas Dairy is the largest milk procurer in India displacing Dudhsagar Diary which was considered as No 1 previous to Banas Dairy coming at the top. 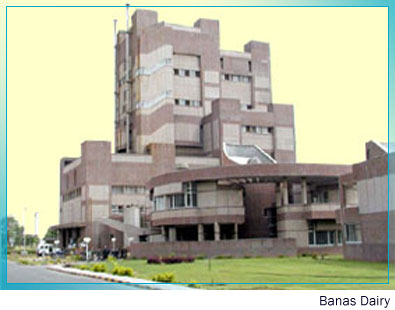 Setting Up of Banas Dairy in Palanpur

With the support of NDDB and under Gujarat cooperative society Act 1961, Banas Dairy was set up to bring white revolution in the whole country. The foundation stone was laid on January 14, 1971, at Jagana village where 122 acres was acquired for setting up the diary with a capacity to produce 1.5 lakh liters of milk. It went through expansion plan in the year 1998 when Banas II was set up.  Now the dairy has expanded so much that Banas III had to be set up to meet the ever growing requirements. By the year 2000 highly automated powered milk plants and liquid milk was set up. There are various village cooperatives that are associated with Banas diary and this has resulted in providing employment to a large number of people living in the vicinity. The core team members are in constant touch with the team leads of the co-operatives and share with them technical advice and necessary inputs on a regular basis which are required to be implemented for proper functioning of the dairy and for maintenance of the production of milk.

Here a wide variety of dairy products are manufactured including butter, milk, milk powder, ice cream, ghee, pedas, tea etc  under the brand name Sagar, Amul and Banas. Gujarat Cooperative Milk Marketing Federation is responsible for marketing the products. Many energy conservation projects both for the producers and also at the plant level are run by the dairy. Milk in lakh liters to various cooperatives in Kanour and Jaipur are provided by Banas dairy. 1.8 Lakh household of farmers receive various technical inputs. These are organized through 1200 cooperative milk societies in villages.

Apart from the main business of producing dairy products, Banas dairy has set up several special programmes for the social welfare of the people around the locality as well. One of such programmes is to reduce malnutrition among the children by providing them with enough calorie intake. In this programme all the co operatives must store certain pre decided portion of whatever they produce in a special can so that it can be distributed to those children through the village mandir or through the aanganwadis. Another initiative taken by the dairy is planting and maintenance of sapling by every house of the village. This has been further facilitated by the good monsoons that the city has been receiving in the last few years. Several religious processions and poojas are organized during the planting of the saplings. The saplings that are planted are medicinal in nature and the farmers can reap benefits once they grow.