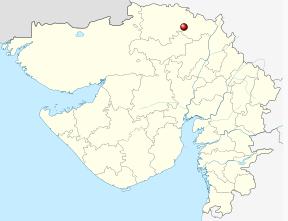 Jessore Sloth Bear Sanctuary is close to the Gujarat-Rajasthan border and just about 45 kilometers from Palanpur, which is also the railway station closest to the sanctuary. Falling under Banaskantha district, it spreads across a 180 square kilometer region and was pronounced a sanctuary in the year 1978. The sanctuary was mainly created for protecting sloth bears which are classified as vulnerable according to the IUCN red list. The number of these sloth bears is dwindling and is now threatened by extinction. The sanctuary is near Jessore Hills which is why the name became Jessore Sloth Bear Sanctuary. 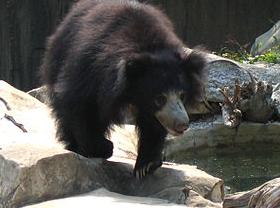 It is said that many Indian hunters as well as travelers often saw the bear hanging upside down on trees and started calling the bear as bear sloth since it reminded them of an animal named sloth found in South America which also hangs upside down and has similar arboreal habits as that of a sloth as well as physical characteristics.

In the 19th century one of these sloth bears was part of a French zoo where it was examined by scientists and it was found that it was actually a species of bear and not a sloth. From that time the bear was called as Sloth Bear instead of Bear Sloth. It is also worth noting here that during the 18th Century the scientific name by which the Sloth Bear was known is Ursine Bradypus.

The sanctuary is close to the Thar Desert and location wise it is towards north of the desert. This bear sanctuary comprises of two different kinds of ecosystems; one being desert ecosystem and the other being dry deciduous one. Desertification of the area is prevented because of sufficiently forested regions that are part of the sanctuary and also help to stop desert from advancing.

Thorny scrub mainly of dry deciduous and semi-arid as well as arid types comprises vegetation of Jessore Sloth Bear Sanctuary. However, according to reports forest area inside the sanctuary is reducing and apart from that corridor consisting of forests around the Aravalli hill area is also decreasing which is causing disruption of bear migration. A weed is becoming cause for concern as it is affecting growth of cattle and goat population in the region and also causing forest fires. The weed is called Prosopis Juliflora and its local name is Gando Baval, which has now spread up to twenty percent of hilly regions and forty percent of lower areas.

In a study funded by UNDP, around 406 plant species were classified comprising of:
Out of these 406 plant species, there are eighty nine plants which have medicinal properties. Additionally, families of:
Besides sloth bear, other animals which are part of fauna of Jessore Sloth Bear Sanctuary include Sambar, Porcupine, Leopard, different types of birds, Wild Boar and Blue Bull. Some of the other endangered animals present in the sanctuary include Caracal, Jungle Cat, Hyena, Civet and Wolf.

Similar to flora study by UNDP, a similar study was done for fauna especially for the animal group called as herpetofaunal. The study found fourteen species of reptiles and amphibians in the sanctuary which consists of Varanus, Python and Muggar which fall under endangered category and Flap shelled Turtle falling under vulnerable category. The major threats these vulnerable and endangered species are facing are of shortage of water and hunting. During the study many reptiles were also found like monitor lizard, krait, different kinds of viper and cobra.

Avifauna studies have also been performed which tell us that there are around 105 species which also includes different migratory birds. In this list some species are included which are considered vulnerable and near threatened, these are:

In terms of mammalian fauna in the sanctuary, about twenty species have been found and out of these twenty, Indian Pangolin and the Sloth Bear are under vulnerable category of animals.

If we talk about the Sloth Bear, it is generally found in several Asian countries like Bangladesh, Sri Lanka, India, Nepal and Bhutan. Till now 2 sub-species are known, one is Sri Lankan Sloth Bear and the other is Indian Sloth Bear. Normally they have dark brown and black colors and have yellowish patch over chest. They attain height of around 1.8 meters and weigh up to 141 kgs (males) and 95 kgs (females). Sloth Bears have long hair over the ears, which is not found in other type of bears and they have excellent sensory perception. The life expectancy of Sloth Bears is around twenty five years.

The habitat consists of grass lands and dry or wet rain forests which are full of trees and shrubs. These bears are omnivorous and are fond of insects with termites being favorites. They also like other things such as fruits, honey and grass. During summer season fruits make 50% of the diet while at other times they devour termites and different types of insects. These bears prefer to live in places where there is abundance of fruit trees, termites and honey.

Threats to Survival of Sloth Bear

The threats Sloth Bear is facing in the sanctuary include:
Initiatives to Conserve Bio-diversity

Forest department, MEF, universities, reputed institutes and local communities are trying their best to implement conservation as well as proper management of Northern Gujarat’s bio-diversity with support from UNDP. Additionally, information is being gathered which will assist in development of local establishments to implement new ideas for resolving threats that the sanctuary faces.

Other Places of Interest in Jessore Sloth Bear Sanctuary

If you coming to visit the sanctuary then you can also visit the 2 temples present inside the sanctuary and a sacred grove. One of the temples is quite well known and is a Kedarnath Mahadev temple, visited by a number of pilgrims during the time period between October and November.

Best time to visit the Sanctuary: For those coming to visit the sanctuary, post monsoon and up to winter is the best time to explore natural beauty of this place. For those who will be staying for a few days, there are good number of hotels in Palanpur to suit every budget.

Things To Do: During your stay you can go to the nearby wildlife interpretation center located in Balundra or relish the impressive view of plains of Rajasthan and Aravali foothills merging into one another. In addition to it, you can go for long walks inside the sanctuary along the wooded treks passing through the thick forest and enjoy your time.

How to Reach the Sanctuary:

Explore more about History of Palanpur